An emoji map of San Diego has won the “Most Unique” map award at the Esri User Conference 2017. Featuring 48,400 emoji, the original map from Europa Technologies was a popular exhibit at the major GIS event which this year drew almost 18,000 attendees.

The map represents a 4km x 4km area covering the Gas Lamp Quarter in the south up to the airport, Balboa Park and the world-famous San Diego Zoo. Over 330 different emoji characters were utilised, including those supporting diversity. The map-building process was primarily data driven with research using satellite/aerial imagery for areas with unknown land use. Some fun and mischievous features were added, including a unicorn and “Bob” the zombie – both set as challenges for viewers to find.

Europa Technologies also exhibited an Emoji Map of the World. This map was a blank map of the world, based on Europa Technologies own data products, where attendees could place emoji stickers at locations significant to them. By the end of the conference, the map was heavily populated with several hundred contributions.

Warren Vick, Founder & Director of Europa Technologies, and the designer of both maps, said “I’m delighted that our Emoji Map of San Diego was such a hit at the Esri User Conference. It was wonderful to hear so many kind comments about the work from both locals and fellow visitors. Our Emoji Map of the World was also a great success and, with so many attendee sticker contributions, it is a fantastic souvenir of this year’s conference.”

July 17 is informally designated World Emoji Day since it is the date commonly featured on the calendar emoji. 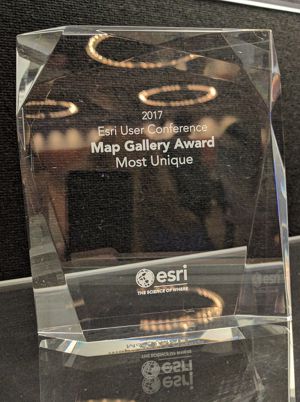